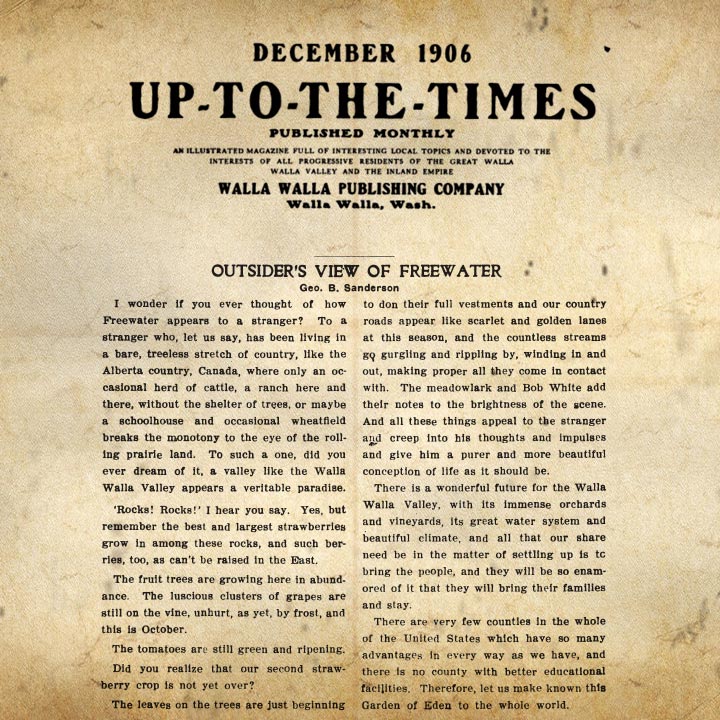 Originally published in "Up to the Times", a Walla Walla Valley publication.
By George B. Sanderson in 1906.

I wonder if you ever thought of how Freewater appears to a stranger? To a stranger who, let us say, has been living in a bare treeless stretch of country, like the Alberta country, Canada, where only an occasional herd of cattle, a ranch here and there, without the shelter of trees or maybe a schoolhouse and occasional wheatfield breaks the monotony to the eye of the rolling prarie land. To such a one, did you ever dream of it? A valley like the Walla Walla Valley appears a veritable paradise.

'Rocks! Rocks!' I hear you say. Yes, but remember the best and largest strawberries grow in among these rocks, and such berries too, as can't be raised in the East.

The fruit trees are growing here in abundance. The luscious clusters of grapes are still on the vine, unhurt, as yet, by frost... and this is October.
The tomatoes are still green and ripening.

Did you realize the second strawberry crop is still not over?

The leaves on the trees are just beginning to don their full vestments and our country roads appear like scarlet and golden lanes at this season, and the countless streams go gurgling and rippling by, winding in and out, making proper all they come in contact with. The meadowlark and Bob White add their notes to the brightness of the scene. And all these things appeal to the stranger and creep into his thoughts and impulses and give him a purer and more beautiful conception of life as it should be.

There is a wonderful future for the Walla Walla Valley, with it's immense orchards and vineyards, its great water system and beautiful climate, and all that share need be in the matter of settling up is to bring the people, and they will be so enamored of it that they will bring their families and stay.

There are very few counties in the whole of the United States which have som many advantages in every way as we have, and there is no county with better educational facilities. Therefore let us make known this Garden of Eden to the whole world.