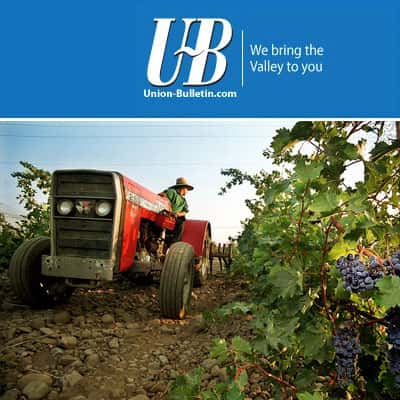 “The Rocks District of Milton-Freewater” got its name for good reason: The stones are everywhere.
In fact, if you dig into them, you could go 400 feet down and only get out of gravel because you’ve reached”, said Whitman College geology professor Kevin Pogue.

On a wind-driven day, Pogue easily found the western boundary of the AVA, and didn’t need a map to do it. His left foot perched on the cobbles inside the boundary, while his right landed on silt.

Pogue was the person who submitted the AVA petition to the Alcohol and Tobacco Tax and Trade Bureau after the request was organized and managed principally by Steve Robertson of Delmas/SJR Vineyard and seven other growers and producers.

Pogue knows the land as well as he knows the Himalayan thrust belt of northern Pakistan, where he focused years of his life’s work before 9/11. In Milton-Freewater, he found something different from anywhere else in the Walla Walla Valley — maybe in the world.

It is the only AVA in the country where virtually the entire boundary — 97 percent — has been set by a single-soil series and a single land form. An alluvial fan created by the flow of the Walla Walla River exiting the Blue Mountain foothills moved the rocks en mass.

The region has been compared to Châteauneuf-du-Pape in the Rhône Valley. But Pogue believes in some ways it’s even better.

The cobbles there lie over clay. A thunderstorm will leave standing water in the vineyards. Not so in the iron-rich Rocks District where the stones radiate heat during the day but cool at night and don’t need cover crops.

“Because these stony vineyards make such distinctive wines, these vineyards may be the strongest evidence in favor of true terroir in America,” Wine Spectator Editor at Large Harvey Steiman said in a 2013 column on the region.

The magazine’s two top-rated Northwest wines as of 2013 both came from The Rocks District, according to information online. Both were the AVA’s signature syrah. Both reportedly scored 98 out of 100.

The Walla Walla Valley AVA spans portions of Washington and Oregon. Historically, the challenge for wineries as a side-effect of this geographical designation has been marketing.

In Oregon, the majority of wineries are on the western side of the state and have a stronger focus on pinot noir than cabernet sauvignons, merlots, syrahs and other reds that come from Eastern Oregon.

But Washington’s promotions are focused on wines from the Evergreen State. Promotions across the state lines have come largely from local membership marketing organization the Walla Walla Valley Wine Alliance.

“But to us, that doesn’t make a difference. It’s the Walla Walla Valley,” he said.
“There wasn’t an ‘Oregon’ and a ‘Washington’ 10,000 years ago. The sun doesn’t shine any differently on one than the other.”

While establishment of The Rocks District could help put Milton-Freewater on the world’s wine map, there’s another hitch in all of this. As it currently stands, wineries that source their grapes from The Rocks District would be able to put that on their label only if they also finished the product in Oregon.

The TTB is considering an amendment that would allow the use of appellations of origin on wine labels when the wines have been fully finished in a state adjacent to the AVA.

A comment period on that proposal closed in April. A decision awaits.

The idea holds promise for those who represent wine organizations across the country dealing with similar geographic borders. But it’s not perfect, according to some of the comments.

And it’s frightening to some in Milton-Freewater who fear Walla Walla will continue to flourish with development while their community sees no direct growth.

One of the main concerns is the language that the wine could be finished in an adjacent community. Where it may make sense that grapes in Milton-Freewater could become wine 15 miles away in Walla Walla, the verbiage would allow those same grapes to be produced in Seattle or even San Diego with “The Rocks District of Milton-Freewater” on the label.

Some of the 41 commenters who posted on the TTB’s website said they approve of the idea but want it refined to carry reasonable limits.

Oregon, by the way, has four AVAs that cross state lines.

The petition for the AVA designation identified 19 wine producers with vineyards within the boundaries. Only three of those also have winery facilities within the AVA.

While the verdict is out, the celebration of The Rocks District goes on.

“It’s time. We’re setting the stage now,” said Saviah Cellars co-owner and winemaker Rich Funk, who’s been enchanted by The Rocks of Milton-Freewater since his first sip of its syrah in 2000.

Funk was introduced to the grapes through the wine of Christophe Baron, the vigneron and winemaker who recognized the area in 1996 as similar to Châteauneuf-du-Pape. He planted his first grapes in the cobbles within a year.
Baron was not the first to recognize the value of the stones.

Fruit has flourished in the cobbles for more than 100 years. In a 1906 article in the monthly Up-To-The-Times publication, “An Outsider’s View of Freewater” proclaimed, “Rocks! Rocks! I heard you say. Yes, but remember the best and largest strawberries grow in among these rocks, and such berries, too, as can’t be raised in the East.

“The fruit trees are growing here in abundance. The luscious clusters of grapes are still on the vine, unhurt, as yet, by frost, and this is October.”

Nevertheless the area had mostly been known for orchards in its more recent history.
In that bottle of Baron’s syrah, Funk found something he wanted to explore, too.

“A pronounced savory, funky aromatic note and meaty spicy taste to the fruit, which made me very curious about how this could be so different from all the other syrahs I had tasted,” he said.

He and his wife, Anita, bought 10 acres in 2006.
The wines, he said, are the epitome of terroir-driven — meaning what’s in the glass reflects the geography, climate and conditions.

“You don’t want bells and whistles and widgets and smoke and mirrors,” Funk said as he poured his 2010 Funk Estate Syrah.

“That’s as close to drinking the Earth as you get.”

One of the biggest bottlenecks in producing the wines is the shortage of fruit, he said. Of the roughly 3,770 acres included in The Rocks District, about 250 contain commercially producing vineyards, according to the application that was approved in February.

“That’s our bottleneck down there,” Funk said.

He hopes to get his vineyards up to 30 acres in the next five years.

“It makes the story more about terroir than boundaries,” she said. Pogue has led 50 to 100 tours of the AVA. He sees nothing but growth rising from the stones — both in wine production and in economic development.

“The majority of the money will be from people coming in buying vineyard land and building a winery,” he said.
“There’s a visual appeal to these rocky vineyards. You’d be crazy not to take advantage of that and build a tasting room here.”